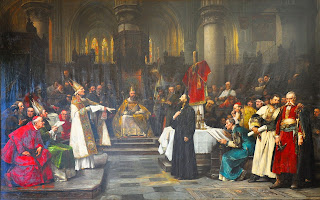 The story of the Moravian's and Parliament in Britain starts with the loss of the Protestant Tudor Dynasty and the Scottish King; King James I and his son, James II(the last Stuart to be King) and the twisted Religious Politics between France, Spain, Rome, Holland, England, Scotland, Ireland and North America. Also, the recent spat Parliament had with Queen Anne and William and Mary (the Dutch rulers). The new Hanoverian Kings (George I and George II), were seeking groups who would help cement their new reign.

The Moravian's were, amongst other religious groups, arguably a pawn used by the Hanoverian descendant King of England (King George I and his son, King George II and ultimately King George III) for their own court ends. The Moravian's were ultimately used in Royals and Parliament's attempts to gain control of regions of the world, including the Americas, that frankly were relatively newly acquired by the English.  However, the Moravians saw it differently and behaved differently; as they sent missions not for conquest but to help indigenous peoples and spread their word of God amongst them. While not religious zealots, the group often provided a sanctuary for oppressed protestants from the Continent and set up communities around the world.

Long before Martin Luther nailed his work to the doors of the Catholic church, the Unitas Fratrum (Latin for the "Unity of the Brethren") with its heritage dating back to the Bohemian Reformation in the fifteenth century (Jednota bratrská in Czech) established in Kingdom of Bohemia. The name by which the Church is commonly known comes from the original exiles who fled to Saxony in 1722 from Moravia to escape religious persecution, but its heritage began in 1457 in Bohemia and its crown lands (Moravia and Silesia), then an autonomous kingdom within the Holy Roman Empire (today the Czech Republic). So it's easy to understand, opposing the 'Holy Roman Empire' and the Pope, only led to torture and execution by various means. 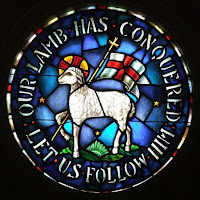 "The Moravian Church’s emblem is the Lamb of God (Agnus Dei) with the flag of victory, surrounded by the Latin inscription: Vicit agnus noster, eum sequamur (English: "Our Lamb has conquered, let us follow Him"). The Moravian Church (Unitas Fratrum) came to England in the early eighteenth century and was recognised by Act of Parliament (Acta Fratrum 1749) as an ancient Protestant Episcopal Church descended from the Bohemian Brethren of the fifteenth century. Under the leadership of Nicolaus Ludwig, Count von Zinzendorf, who in addition to being a German nobleman (the George's filled their courts with Hanoverians and other German speaking nobles and ladies) was a Bishop of the Moravian Church, it took an active part in the great Evangelical Revival of the eighteenth century and was a pioneer of modern Protestant missionary work (1732). The evangelical revival in Scotland was a series of religious movements in Scotland from the eighteenth century, with periodic revivals into the twentieth century. It began in the later 1730s as congregations experienced intense "awakenings" of enthusiasm, renewed commitment and rapid expansion. This was first seen at Easter Ross in the Highlands in 1739 and most famously in the Cambuslang Wark near Glasgow in 1742." (source: Wiki)

Parliamentary Shift and a New Dynasty Emerges in Britain

The Hanoverian king, George I; after King James II was sent into exile, largely because James sided with the Catholics for control of the Kingdoms of England, Wales, Scotland and Ireland with the help of the French Catholics, the Pope and others. This political, religious and governmental nightmare, made the German speaking King George I, uneasy. He often spent more time abroad (in Hanover, Germany) than he did in England. While he and his heir apparent, George II did not get along, they both had keen survival instincts and applied them liberally, aiding and abetting, protestant religious groups to narrow the gap between Parliament and the Royals and further cement their protestant beliefs. The kings also hoped that protestant religious groups like the Moravians could help strengthen their hold on Scotland and attempt to make inroads into Ireland and all the colonies, including the Americas and Canada. 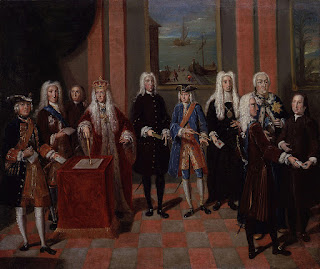 Portrait of a group of Moravian Church members with King George II of Great Britain, attributed to Johann Valentin Haidt, circa 1752–1754 (wiki)

Moravian Church.; Great Britain. Parliament. House of Commons. Committee to Whom the Petition of the Deputies of the United Moravian Churches, in Behalf of Themselves and Their United Brethren, was Referred.; Great Britain. A composite volume. Some exemplars arranged differently. First item ([2], 635-638 p.) includes, with separate t.p.: Anno regni Georgii II Regis Magnae Britanniae, Franciae & Hiberniae, vicesimo secundo : at the Parliament begun and holden at Westminster the tenth day of November Anno Dom. 1747 ... London : Printed by Thomas Baskett ... and by the assigns of Robert Baskett, 1749, London: Printed by the Assigns of R. and Edw. Atkins Esquires. For Thomas Basset at the Sign of the George near Cliffords Inn in Fleetstreet. Small 2vo, 12x 7.75 in.  First Edition. [Blank]; 2, [Tittle page, iii]; 7F-5; B-F2; A-I2; K-O2; X-Z2; Aa-Ii2; Kk-Qq2; [Blank].  This copy is bound in full contemporary sheepskin, the pages are crisp but the boards are detached and last section of Epilogue is disbound from major work. Rest is holding. Loss to spine with chips and edges bumped on boards.  Signed on front board by Charles Russell Lowell, Sr. and opposite page by Charles Russell Lowell, Jr.

Report from the Committee to Whom the Petition of the Deputies of the United Moravian Churches, in behalf of themselves and their United Brethren, Was Referred, together with some extracts of the most material vouchers and papers contained in the Appendix to the said report --Appendix of the most material vouchers and papers referred to in the Report (58 p., 2d count) -- “Unitatis Fratrum fidei, liturgiae et praxeos expositio, tum etiam circa credenda paritèr atque agenda dispensandi ratio -- Enchiridion theologiae patristicae -- Epilogus. (MORAVIAN).

An interesting look at the British government's early encouragement of the settlement of Moravians in the American colonies. OCLC locates only 17 copies.

Charles Russell Lowell, Sr. (15 August 1782 in Boston – 20 January 1861 in Cambridge, Massachusetts) was a Unitarian minister and the son of judge John Lowell. Biography: He was born in Boston, Massachusetts, and attended The Roxbury Latin School and later Harvard College in 1800 where he studied law and then theology. After two years in Edinburgh, Scotland and one year on the Continent, Lowell was, from 1806 until his death, pastor of the West Congregational (Unitarian) Church of Boston. From that year until 1840, he traveled extensively in Europe and the east. During the latter part of his life Lowell officiated only occasionally in his church. Lowell was elected a member of the American Antiquarian Society in 1814, and served on its board of councilors from 1820 to 1853.[4] He married Harriet, daughter of Robert T. Spence, of Portsmouth, New Hampshire, an officer in the U. S. Navy. Harvard gave him the degree of D.D. in 1823. He was a fellow of its corporation from 1818 until 1833.  Almost alone, he spoke out from the pulpit against slavery to Boston’s elite. Charles Russell Lowell, Jr (1807-1870), son of Charles Lowell, Sr. and Harriet Traill (Spence) Lowell, solidified the already strong ties between the Lowell and Jackson families by marrying Anna Cabot Jackson, daughter of Patrick Tracy Jackson, in 1832. Jackson, a merchant whose business failed in the Panic of 1837. Charles Russell Lowell devoted the remainder of his career to cataloguing the books of the Boston Athenaeum, while his wife opened and conducted a successful school for young girls in Boston.

The Book can be Found at our STORE