I'm always amazed when I research a book that I have recently found. It sometimes is like a mystery and this is one of those rare moments when talking about a first edition, first printing from the Smithsonian Institute is a pure joy. Unfortunately, I will sell this book and hope that the buyer will treasure it as much as I do.

As a book dealer, you have to learn to let go. Sometimes letting go is very difficult because the book becomes somehow attached to your being, sometimes without your even knowing it. This is one of those books. It crept up on me. Historically, it is nearly a one of a kind compilation of provenance as I doubt that any other similar copies exist, unless more than one copy was sent to Britain's 'Royal Institution' signed on tipped in lithographic letter form by Joseph Henry, the first Smithsonian Secretary; no small man of accomplishments on his own, and his assistant, Charles Coffin Jewett, who later went on to run the Boston Public Library and help set up a National Union Catalog (NUC) later in his life. It also has the small subtle stamp of the Royal Institution as well, confirming the books' receipt in England. How it wound up in public hands is another story, but I found it, or rather this book found me.

I was browsing a book store in London, which I always try to do when I'm on business to the continent or to the UK and I always ask the annoying question of 'do you have any books related to the American Revolution?' Sometimes the subtle and very British squirming is a pleasure to watch. I usually always joke with them as well about being from Boston, 'you know, the one that got away...'

Sometimes there is laughter and a good joke or two back from my victim about Americans and Britain and 'King George the 3rd' who by the way could barely speak a lick of English, let alone American English. Let's not forget Parliament and the disastrous course of taxation without representation, appalling. No wonder George III and his cronies lost the colony!

Well 1849, the year that book was published is not that long after the burning of the Whitehouse by the British invasion forces in 1814. Why is that important, well the British government was still stoking the fires of Southern secession in the 1840's and 1850's and assisted the Southern States during the Civil War! 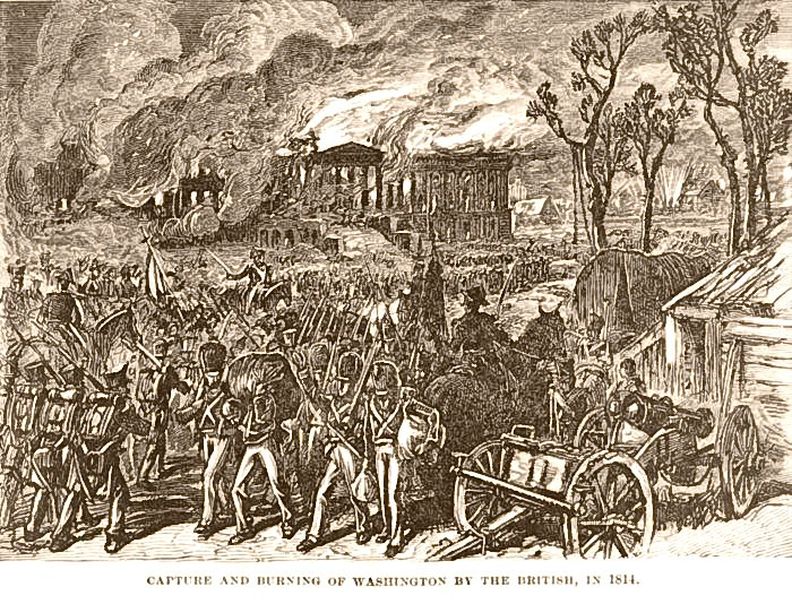 And adding to this the continuous wars with our Native American peoples, slavery, the talk of secession in congress and in our Southern States; spurred in part by The British who would have been delighted at the thought of re-capturing a significant chunk of the Southern United States in a split with the North by the way.

I searched Wiki and found the following list of Native American Tribal wars with the US Government a compelling listing: 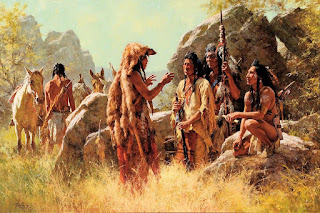 So when Joseph Henry decided to publish a work comprising the 'Ancient Monuments of the Mississippi Valley...in 1846' it was a bold statement about more than just Native Americans; because throughout the country, hostilities, discrimination and outright murder of Native American peoples and vice versa was happening and the stories were in the press regularly. If you have ever wondered about the opinions of Americans about Native Americans and African Americans, reading Mark Twain's accounts will provide you with an excellent view of the way a majority of the press and the reader's thought in 1849. The work was actually commissioned in 1846 and accepted for publication in 1847, printed in 1848 and sent to the Royal Institution in 1849.

Large 4to. Original publisher's cloth, spine lettered in gilt, covers with blind-stamped rules; pp.xxxix (including one blank), 306, with 207 fine wood-engravings in the text, 2 plates of tinted lithographic views (one bound frontispiece) and 46 lithographic plates (mostly plans and elevations, two of skulls and several of artifacts, tools, pots etc.); cloth and gilt faded; rear hinge weakened, corners a little worn, a few preliminaries with short tears to gutters, p. 90 with small paper flaw to gutter, occasionally light spotting; and some separation of the upper spine but holding. Provenance: it was presented by the Smithsonian Institution to the Royal Institution (of Britain) with a lithographed letter form, printed on blue paper, dated Washington, January 1, 1849, the addressee's name filled in by hand, signatures of the Smithsonian's founding Secretary, Joseph Henry and his assistant secretary tipped onto the front fly-leaf, lower outer corner of the series title with Royal Institution Stamp. This book does have some flaws in its binding (separation along the spine, internal but holding slightly), toning and minor tears but it is a remarkable survivor. 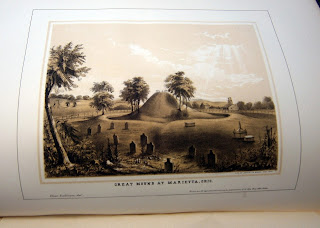 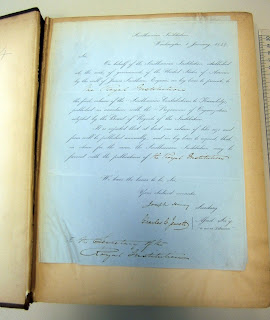 Signed Letter of Transmission to the Royal Institution of Britain 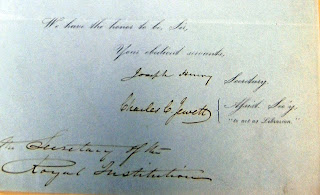 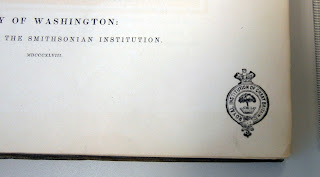 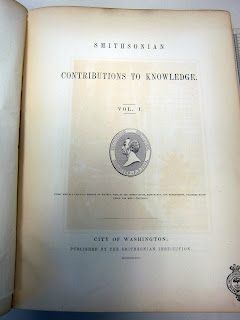 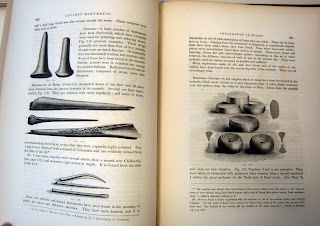 Images of tools an other items 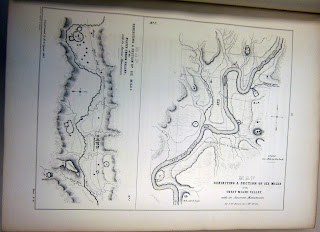 This book is a testament to the very hard work and dedication of the two researchers who approached the Institute about the project and were eagerly encouraged by President Polk and John Henry.

Smithsonian History (bear with me, you will see the full circle)

"Smithson, the illegitimate child of a wealthy Englishman, had traveled much during his life, but had never once set foot on American soil. Why, then, would he decide to give the entirety of his sizable estate—which totaled half a million dollars, or 1/66 of the United States' entire federal budget at the time—to a country that was foreign to him? 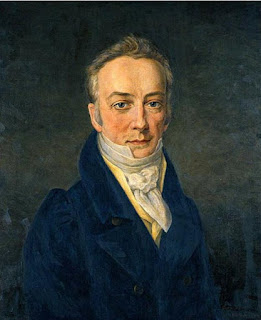 Some speculate it was because he was denied his father's legacy. Others argue that he was inspired by the United States' experiment with democracy. Some attribute his philanthropy to ideals inspired by such organizations as the Royal Institution, which was dedicated to using scientific knowledge to improve human conditions. Smithson never wrote about or discussed his bequest with friends or colleagues, so we are left to speculate on the ideals and motivations of a gift that has had such significant impact on the arts, humanities, and sciences in the United States.

Smithson died in 1829, and six years later, President Andrew Jackson announced the bequest to Congress. On July 1, 1836, Congress accepted the legacy bequeathed to the nation and pledged the faith of the United States to the charitable trust. In September 1838, Smithson's legacy, which amounted to more than 100,000 gold sovereigns, was delivered to the mint at Philadelphia. Recoined in U.S. currency, the gift amounted to more than $500,000. 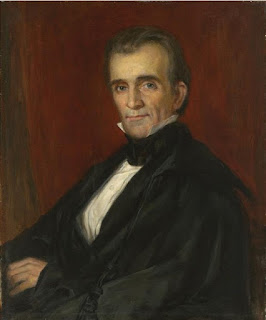 After eight years of sometimes heated debate, an Act of Congress signed by President James K. Polk on Aug. 10, 1846, established the Smithsonian Institution as a trust to be administered by a Board of Regents and a Secretary of the Smithsonian. Since its founding, more than 170 years ago, the Smithsonian has become the world's largest museum, education, and research complex, with 19 museums, the National Zoo, and nine research facilities." (quotation directly from: https://www.si.edu/about/history The Smithsonian Institute- Our History, highlights and underlining by me, Richard Gabriel).

NOW, the full circle connection is made! The VERY First Administration includes the President of the United States, James K. Polk, the First Secretary Joseph Henry and signed by Joseph Henry on a tipped in lithographic printed letter and sent to the Royal Institution, that Smithson deeply admired, making this find a very rare book with an even rarer provenance!

See the listing at our Web Store: store.calixbooks.com