The Collection of Civil War Memorabilia- Where to Start?

1911- The Photographic History of the Civil War

The collection of Civil War memorabilia could be a daunting task but a good place to start is the "Semi Centennial Memorial- The Photographic History of the Civil War in Ten Volumes. By Francis Trevelyan Miller; Editor-in-Chief and Robert S. Lanier; Managing Editor. Thousands of Scenes Photographed from 1861-65, with Texts by Many Special Authorities." Copyright by the Patriot Publishing Company, Springfield, Mass. 1911. Stated First Edition. 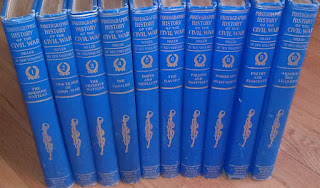 Ten Volumes Weigh in at 40 pounds

Our Civil War in the United States was a complicated progression of social, communal and political disorder, that was much more complicated than just only the civil rights of the oppressed and exploited slave populations in the Southern States, it was also about the expansion of the United States, past the Mississippi River and into the far west; as well as the Southwest. In the Northeast, Copperheads sprung up who wanted to dissolve the Union and there was a mini-civil war amongst Northerners between the abolitionists, copperheads and unionists. Very complicated.

Racism, bigotry, and fascism abounded across the States, no single State could claim sole proprietorship to the demagoguery, innuendos and outright discrimination against anyone or any institute or group that disagreed. Ideologies regaling or disapproving of the 'Ascent of Man' (Darwin) sprung up across the country. In the South, any 'science' debunking the theory that 'all peoples of the earth are equal' was widely supported (see the story of Louis Agassiz). Religious and moral societies along with a wave of protestant revival across the Northeastern United States, starting in the 1840's led to the 'abolitionists' who were sometimes violent (John Brown) in their approach to freeing the slaves but also holding a philosophical, moral and societal belief, that the slaves were 'lesser' people and even though they should be free, they would not hold the same rights as a white, protestant, christian, educated man and would they be allowed to vote, certainly not. That was the general consensus amongst a vast majority of the population in the US, whether North or South. Adding to this confusion was the continuous prodding by the British, French, Dutch and Spanish monarchies at the shores and borders of the US, also surreptitiously wishing the Union would fail. Also added to the milieu of political, social and economic forces that rapidly spiralled out of control, was the fight between States rights and the Federal government, all leading to one of the worst and bloodiest series of battles in the US. 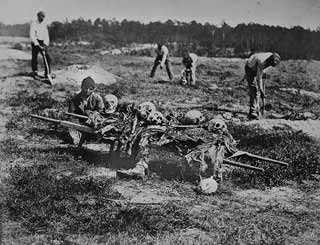 Mathew Brady photographed the Dead of Antietam: "The New York Times published a review on October 20, 1862, describing how, "Of all objects of horror one would think the battle-field should stand preeminent, that it should bear away the palm of repulsiveness." But crowds came to the gallery drawn by a "terrible fascination" to the images of mangled corpses which brought the reality of remote battlefields to New Yorkers. Viewers examined details using a magnifying glass. "We would scarce choose to be in the gallery, when one of the women bending over them should recognize a husband, a son, or a brother in the still, lifeless lines of bodies, that lie ready for the gaping trenches." [source: wiki} Many of the Brady and other photographers images are found in this series of
books. 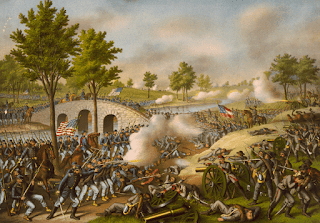 No photos were taken of the actual battle

As the war raged on, Lincoln and his staff became more and more distraught by the events and
starting with Lincoln's firing of McClellan (who was too cautious) and appointing Grant and
Sherman, plus his judicious use of the Railroad system in the Northeast, they could move very
large quantities of food, munitions, troops and horses to staging areas; the war turned to their
favor. This book series with all the photographs will give a collector a look into the actual war.
Many photos of staging, camps and other recorded actions on both sides, tells the story. It also
provides the collector with some semblance of some order to collecting. What to hunt for and how
to document a discovery or a find. Close inspection of the uniforms, arms and equipment are good
sources for helping to verify an artifact. The civil war is one of the most documented of wars thanks
to the advent of photography. This series of volumes is one of the best.