Books of Hours
Books of Hours grew out of the Psalter and the Breviary and for more detailed information on collecting, grading and buying Books of Hours; there are a number of authoritative texts available to the curios reader.
Just to highlight a few books about books of hours. There are also many individual books written about books of hours as well as facsimiles of the books. A beginning collector can first purchase the texts about books of hours (some of which are somewhat hard to find and can be pricey (~$75-$250) and can be found at Advanced Book Exchange or on Biblio and once the appetite has been educated, collecting the facsimiles of famous works; while not the same as possessing an original work, can be rewarding. One thing we don't recommend is buying individual 'leaves' of Books of Hours, unless you know exactly which book they came out of and it is worth. Collecting, individual leaves is a market but unless it is a very rare leaf, while unique, offers a fraction of what a complete book of hours possesses in the way of presentation and worth. Retail pricing of books of hours can vary widely, ranging on the low side for incomplete works in the $15,000 to the upper end of $900,000 for a well-documented rare book of hours.

The books of hours were made mostly for women, but books are also made for the male of the house. Books of Hours were passed down and sometimes were divided amongst family members to keep the peace within the family. Books prior to printing could be as expensive as possessing rare gems, silver, gold and even land. The rare books made for the kings, queens, princes and princesses that have been identified and are a part of medieval history, are quite expensive and many are held by museums and rare books libraries across the world. The works usually always have facsimiles made and reproduced in limited editions so they too have become valuable.

Examples of the Structure of a Typical Book of Hours:

The Calendar page is filled with information and is actually a regional guide to where in Europe or in what we now call the United Kingdom the book was intended. There are usually three columns, one for the calendar. The first column is known as the ‘Golden Numbers’ or the days of the new moons or full moons throughout the year. The second column is known as the ‘Dominical Letters’ (a through g) that help a reader find the ‘Sundays’ of the month. The third column is the ancient Roman calendrical system listing the Ides (id), the middle of the month and the Kalends (kl), the first day of the month and Nones the ninth day of the month. These three fixed points were used to count backwards to all other dates. 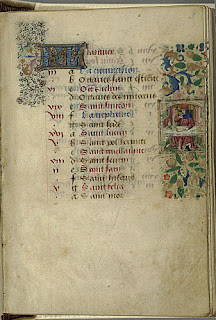 The Red and Blue lettering are for the Saints days and were known as ‘Red Letter’ days, which were the more important dates to celebrate the Virgin Mary,  and other more important Saints. The calendar in the Books of Hours were also known as ‘perpetual calendars’ as they did not include the more important celebration holidays such as Easter or Christmas, but those dates could be calculated backwards from the perpetual dates. The listing of Saints also helps regionalize the origin of the Book of Hours, also known in the Latin form as ‘Horae’.

Hours of the Virgin

Also known as the Little Office of the Blessed Virgin Mary is a set of inspirational lessons, prayers and brief phrases that refer to the ‘eight’ canonical hours of the day that date back to Roman times and were and are still chanted in monasteries. The eight are Matins, Lauds, Prime, Terce, Sext None, Vespers and Compline. Matins and Laud were often sung before sunrise. Prime was often used to teach children to read, hence the word ‘Primer’ is derived from this section. The structure is usually laid out as a series of vesicles that are followed by responses: “Lord open my lips and my mouth shall tell forth thy praise” Response: “God, come to my assistance”. Everything, of course is in Latin. “Domine labia mea aperies et os maeum annunciabit laudem Deus in adjutorium meum intende” 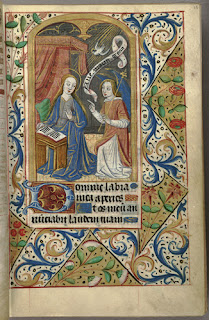 The Litany:  Invocations to God, the Blessed Virgin and assorted saints, each followed by the abbreviation "or", the Latin incipt for "ora pro nobis" ("pray for us"). HRC MS 4, p. 174. Mid-15th Century. Latin and French. Leaf size 7.3 x 5.2 in. One or more litanies of the saints normally follow the Penitential Psalms. In a litany, the reader invokes, one by one, a long list of favorite saints, martyrs, confessors, and holy virgins, ending each phrase with the Latin words ora pro nobis ("pray for us"). Economy-minded scribes often abbreviated this common ending with the letters "or," as in the pictured example from HRC MS 4. 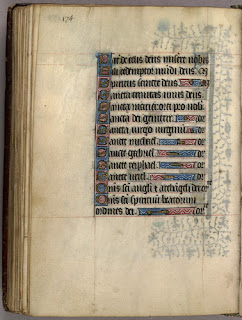 An example of a Litany page in a book of hours

Office of the Dead

During the middle ages, death, famine, early loss of life was more common than living a full rich life. Lives were in the words of a famous English scholar Thomas Hobbes: “Solitary, poor, nasty, brutish and short”. The church realizing the nature of existence and the need for solace through the divine spirit of Christ, Mary, the angels and God, created the rather lengthy section known as the Office of the Dead.

“As in the examples shown here, the illustrations frequently present the evangelists at work writing their gospel onto a scroll or codex and using the implements employed by medieval scribes. The traditional symbol, or attribute, of the evangelist often appears in the illustration, as in these examples from the Ransom Center collections.

The illustration for St. John nearly always shows the apostle seated on the Isle of Patmos—as in this example from HRC MS 5—where Christian tradition holds that he composed the Book of Revelation. The remaining illustrations normally show the relevant apostle working in a scriptorium or study.” These and other Psalms were so well known to medieval worshipers that each Psalm is often indicated only by its incipit, or opening line. The reader is expected to recite the remaining lines from memory.

When the Penitential Psalms include miniatures, they often open with a scene from the life of King David—a bad example of adulterous behavior but a comforting model of repentance and forgiveness—as in these wonderfully illuminated images from an early example of a printed Book of Hours.” 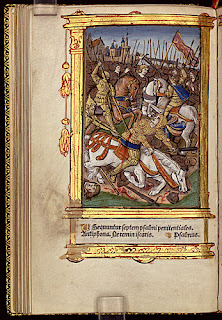 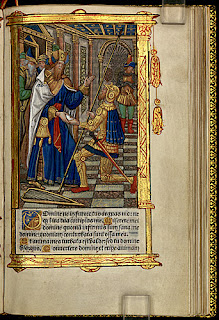 Bravery in Battle and Absolution and Gratitude from the King…

Prayers of the Virgin

This section is mostly text in many books of hours and if there is an image, it is always Mary and her Son, Jesus. “The Obsecro te ("I beseech thee") and the O intemerata ("O immaculate Virgin"), two prayers addressed to the Blessed Virgin, are present in nearly all 15th-century Books of Hours. Each of these prayers is written and recited in the first person and makes a plaintive appeal directly to the Virgin Mary for aid and intercession with her Son. The prayers are sometimes personalized, with the name of the book's original owner inserted into the text or the accompanying illustration. The Obsecro te specifically asks that death not come suddenly or unexpectedly, a plea that may have provided some comfort against the toll of plague and war that afflicted late-medieval Europe.

An image depicting the Virgin Mary at prayer, usually with her Son, symbolizes Mary's role as intercessor in these prayers and is the traditional image for this section. As shown in the example from HRC MS 6, the Virgin is sometimes pictured alone next to the Obsecro te prayer. The Prayers to the Virgin have no fixed position within a Book of Hours, but often the prayers are placed between the Gospel Lessons and Hours of the Virgin.” 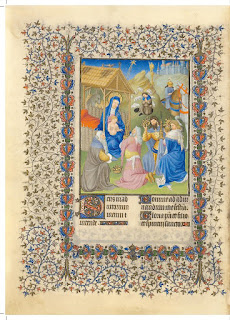 This is the section where particular Saints and their trials and tribulations and exaltations overcoming the injustice that usually results in the loss of their lives for God and their beliefs. “God or the three Persons of the Trinity always begin the Suffrages, followed by the Virgin, the archangel Michael, and John the Baptist (the last two prominently positioned because of their importance as judge and intercessor, respectively, at the Last Judgment). The apostles appear next, followed by male martyrs and confessors (non-martyr saints), female saints and virgin martyrs.
Each Suffrage is composed of four elements: three ejaculations (antiphon, versicle, response) followed by a longer prayer (oratio). The first three elements constitute a string of praises. As for the prayer, its first half recounts an episode from the saint's life or touches on some important aspect of the saint's holiness; the second half of the prayer is always a petition for aid from God through the saint's intercession.” 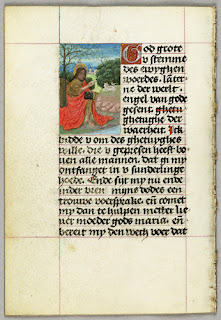 A strange outcome of the church’s domination of the canonical writings is that households during the middle ages did not own a complete bible or even a partial bible. In 405 the definitive version of the bible known as the Vulgate and it reigned supreme for over 1,000 years. Anyone not a priest could NOT own a bible. Bibles prior to the printing press were hand scribed and far too expensive for anyone to own. The possession of bibles is a relatively new and the first really popular bible that was effectively marketed and distributed in Europe and England was by Anton Koberger and is known as the Koberger bible, printed in Latin and High German.

The Gospels in the books of hours were the only way that families could read them, other than attending church and having the priest include a gospel in their liturgy.  The gospels allowed the books of hours to become divine religious possessions that families could look to in their own dire hours of need for prayer and comfort when the church or a priest were not available. The gospels is really the cornerstone of the entire books of hours, linking all of the sections and making the book of hours an important family possession. 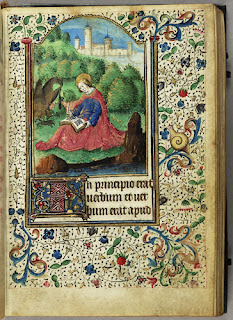